The musical explores how the relationship between them leads to each taking different paths in life. Throughout our own lives we are touched by many relationships. Even seemingly insignificant relationships have profound effects on our lives. When I was younger growing up in Utah, I was really interested in hunting and fishing. I read years of back issues of Sports Afield and Field and Stream magazines that my grandpa collected. I even had my own subscriptions to keep up on the current information. I read over and again every fly fishing story and technique available. Finally, I convinced my dad to buy me a fly rod and reel set up. My summer weekends were spent camping with my whole family in the Uintah Mountains in Northern Utah. I spent years fishing those streams and rivers with salmon eggs, but there was something glamorous about fly fishing that I had to try. 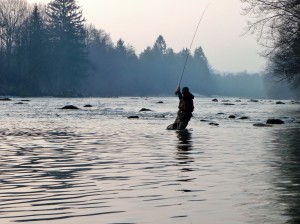 I spent an hour every day after school during the week practicing my casting technique to get my line looped out and settle silently along the edge of river banks. In my back yard, I stalked the big fish and practiced hitting the exact spot where I needed my fly to land. Then finally, the weekend came with a camping trip. Saturday morning I awoke bright and early, as any flyfishermen knows that first light and last light are the ideal times to catch a trout on a dry fly. I stalked along the bank of the river, casting just above where I thought trout were and let my fly drift into the pockets. I had drift after drift with no hits. I watched for even the smallest suck of water around the fly indicating that a trout had taken interest. After hours of nothing but tangles and snags in bushes and trees, I sulked back into camp to get some breakfast. My mom encouraged me, “Just keep trying and you’ll get something eventually.” During the heat of midday, I continued with my efforts with nothing to show when I returned to camp for a late lunch. After lunch there would only be an hour of good light left, so I wondered aloud where I should spend the rest of the day. “How about down where the river turns in a wide slow bend, just down that way?” suggested my dad pointing down river.

I had fished down there many times and knew that each evening there were always fish rising to the insects on the water. “Yeah, I guess,” I replied. I got my gear and bag of flies, then walked towards that direction. I threw a few casts and let them drift as I walked. When I got to a spot where no one was around but me, I set out into the water. I could see the occasional trout rise up and sip a bug from the surface. I was sure I could not miss here! I quickly threw upstream and watched as it drifted down through the rising trout. Nothing. As I continued casting, a stranger snuck up and settled in his chair behind me.

“What are you fishing with?” I heard him ask. I turned to an old man who had dragged a lawn chair down to the bank supposedly to enjoy the river and the sunset, only to find this kid fishing in his spot.

“Grasshopper,” I held the fly up for him to see.

“Black winged, huh? You seen many black winged hoppers along the bank today?”

“Haven’t paid much attention, I guess. The guy down at the fly shop told me this was killer along the edges.”

We talked for a while, though I can’t remember many of the specifics. Eventually Bob, as he had introduced himself, told me to wait there while he fetched something. He later returned with a tiny fly, much smaller than anything in my arsenal. I couldn’t imagine being able to hook a fish with it. He tied it on for me and instructed me where and how to place it above the waiting trout.

It took a few drifts of the fly but, sure enough, I hooked a little trout. It was near dark when I packed up and walked back to my campsite. That night I cooked my single fish on the fire. The next day Bob came by the camp and dropped off a bag of his own hand tied flies. I remember him telling my dad that I was a good kid and had a big future of fly fishing ahead of me before he went on his way.

Bob was a man of building relationships. I never told him, but I kept his flies as a keepsake despite them finally falling apart. They served as a reminder of what a difference good relationships can make in our life. They can keep us going when we think there’s no use, they can cheer us up, they can offer us advice, and they can be counted on to tell us the truth in an intelligent way.

Here are five of my favorite suggestions for increasing your relational intelligence. You can find many more specific and in-depth suggestions in Emotional Intelligence 2.0 and similar books.

I take my daughter to gymnastics on Tuesdays. The first few times there I noticed that a lot of the parents spent the hour on their phones. I feel like it’s a bit of a sad commentary on society that we spend so much time avoiding the present and dealing with the virtual. I sat for a few weeks, just watching my daughter and the other kids learn cartwheels but eventually I felt like I needed to make some kind of connection. I started talking to some of the parents. Then I decided to film the kids and put together a short movie and offered to share it with the other parents. I used my five tips above to begin to drill through the electronic world and make some personal connections in real time.

Obviously we have relationships that are created as in my example above. It is possible to create a place where exchanges occur with no desired outcome. Clearly, as discussed, all relationships can affect us no matter how small. Jim Rohn was quoted as saying, “We are an average of the five people we spend the most time with.” I don’t know that there is any experimental evidence to back this up, but I would say that most of us can see we take on many traits of the people with whom we surround ourselves. I feel like I’m on a soapbox here a little bit, but take some time to connect to the people around you. The electronic world is important in our lives today, but only if we follow it up with actual human interaction. While we’re writing and reading blogs and posting to Facebook and Instagram, a big opportunity is sitting right next to you—don’t miss it.