Can you let the princess go?

In speaking of change I’m reminded of a story I read to my daughter. It is about two farmers who happen to be walking down a muddy road. A cart is being carried by two servants when it stops along the side. Inside the cart is a princess who demands that the servants carry her from the cart across the muddy road, lest her dress becomes soiled.  Both of the porters inform her that if they were to set the cart down it would sink into the mud, forcing her to ride in a muddy cart. Listening to this conversation for several minutes, the older farmer walks through the mud and offers to carry the princess to the shop where it is dry. When he sets her inside the shop, she turns to him and says, “You really held me painfully tight! Now wait here and you can carry me back when I’m finished.” So the farmer waits.

After the older farmer has returned the princess to her cart, he joins the younger farmer on the opposite side of the road. After quite some time of walking in silence the younger farmer says to the elder, “I can’t believe you carried her to the shop and, rather than showing any gratitude, she complains and chastises you. The nerve of her, she should be so lucky to have anyone treat her so well.”

The older farmer responds, “It must hurt your back to have carried her for such a long way. I set her down after only a few minutes, but you have been carrying her in silence for the past hour.”

How do you use imagination to create leadership?

Many times during the lesson on somatic intelligence, I felt as though I were looking for the definition of an abstract painting. One of the things we were asked to consider in class was how imagination may inform our possibilities as a future leader. I was never able to come up with a satisfying answer. Imagination allows me to think of different ways to build a team, but is that really answering the core of the question? I got the impression that most of the other students were stuck in a concrete way of thinking, as I was. Over the next fifteen minutes or so I started to wonder how Greg would answer a question like that. He is the professional coach, after all.

I didn’t record it verbatim, but Greg’s answer basically came down to, imagination is the fuel that allows him to bring the fire that molds and creates a new self. There is nothing concrete to the answer. In many ways the answer he gave is like an abstract painting—there is no specific result but imagination will allow you to see what doesn’t yet exist to create something completely new. Yes! I am working on becoming my authentic self; this class is just a part of the process. My authentic self allows me to be what I need to be and not what others need me to be. I’m focusing on the change, which I can’t yet fully see, to drive results rather than focusing on a specific result and trying to change to fit that. 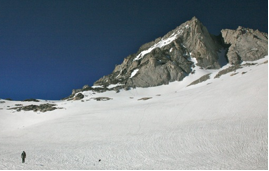 Can productivity be intangible?

Somatic intelligence, as a definition, is understanding how our body or mind feels and applying that to the present situation. I’m typically hungry (some of my coworkers would probably laugh because they see me eating frequently), but after this class I’ve paid more attention to not just this concrete feeling but the abstract that comes with it. Am I hungry and energized, or hungergized, if you will? Or am I hangry? It changes for me, but I’ve become more aware of when I need to eat to avoid hangry and when I can push it a little—allowing my drive by being hungergized.

We ended the night’s journey with forty-five minutes of silent mediation, guided by a recording of Steven Cabot Zin. Forty-five minutes to sit and relax, no problem! After about fifteen minutes I started to notice that I was getting itchy all over. Then my tailbone started to ache, my legs felt like they were tightening, and my neck and shoulder muscles were getting achy. I couldn’t sit still for twenty minutes.

It should have been no surprise that I found it difficult to sit still and be in the moment. I live in a constantly tuned in moving world. The second I wake up, I’m on the go. To just sit and try to be in the moment—well, it’s not natural for me.

I don’t believe this difficulty in stillness is a worldwide phenomenon, however. I recently saw the movie Meru, having waited for almost three years for its release. Meru is a documentary about the first ascent of a 21,850 foot peak in the Himalaya, known as the Shark’s Fin. It’s a feat mixed of ice and rock climbing at high altitude without outside support; a team of three to get everything up and down the mountain.

In the movie, the crew of three are transporting themselves and gear through India. There are several shots of men sitting cross legged, either with their eyes closed or staring off at nothing. Whether they are sitting on a prayer mat or sitting on a rock in the middle of a river, they appear to be in tune with their bodies in a way that we, as Americans (and many other electronically overburdened societies), have a tendency to avoid. Despite there being plenty of science to show that taking these breaks and understanding ourselves better are healthy and lead to greater productivity, it’s hard to see a tangible outcome. 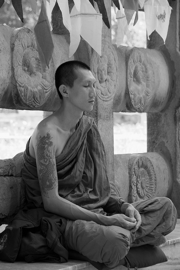 What steps are you taking towards personal change?

Months after the end of the course I am continuing to practice the things we’ve learned. Somatic intelligence has proven to be one of the more difficult ideas for me to put into practice. I get the intangible usefulness of sitting still. Obviously being in the moment and being in touch with our internal feelings affect our external actions. That being said, it’s hard for me to stop and do something where the outcome is largely undefined.

As I write this, I’ve learned something about myself, and I hope you are  finding that these writings provide some personal insight for you as well. I’ve avoided writing for an audience for a long time, believing that there wasn’t a tangible personal benefit from it, not understanding that it was just my definition of tangible that was holding me back. Writing is cathartic: it creates patience by providing an outlet for frustrations, and while it isn’t meditation in the cleanest sense, it allows me some time of still, near silence, that I don’t typically find otherwise. What have I learned about myself? you may be asking. It took introspection to start to dig out the real me, but now that the project has started my frame of reference is shifting to match it without my realizing it. I’m unknowingly creating new towns on my life map.

It’s difficult to be completely honest with ourselves, because we think we understand ourselves. Many of our actions are caused by years of repetition. When we started, circumstances may have justified them as correct or easy, and they grew into us. Personal change isn’t an easy thing that happens overnight. As you’ve read above, though, with some introspection our frames can shift to provide meaning and benefit to actions that fit into our true self, that person we’ve been avoiding for some reason. This is when our map starts to change and show us the correct direction in our world, not someone else’s. It’s a trick we play on ourselves: once we see what we need to create, our mind begins to see ways to justify the activities that fit the creation. The activities we find pleasurable aren’t inherently so, they are pleasurable because they fit the person we’re supposed to be. Take a minute to think about the intangible benefits of your actions, and how are they informing who you are? Is it time to drop your princess and move on?