Emotional Intelligence and Ten Tips to Start Improving Yours

This week we dig even deeper into what makes us tick by exploring emotional intelligence and our Emotional Quotient (EQ) scores. Emotional intelligence is a topic that, I think, is frequently misunderstood. Many people I have talked to explain it simply as being able to understand our emotions and why things make us feel a certain way. It is actually much more than that! If broken down separately into the two words from which the concept arises it becomes clearer.

Emotion results from an impulse to act. Throughout biological evolution, we have been primed for action with good reason. For thousands of years emotions were a primal experience. Emotions meant a here and now prospect of survival. Fear resulted from the impending fight with a large animal, while excitement meant we had defeated that animal. For eons our emotions served as a guide to our survival. Emotion led to taking direct action.

Intelligence, on the other hand, implies the idea of thoughtfulness. Of taking the time to think things through, understand them, and act upon them based on what we understand. Intelligence can be book smarts, street smarts, and directed at specific knowledge. You can see how the evolutionary notion of emotion and immediate action run somewhat counter to the idea of intelligence. Emotional intelligence is, therefore, understanding our emotions and applying the appropriate actions based on that understanding.

There is an additional component to emotional intelligence that is often overlooked, which is understanding the emotions of others and how our emotions have the ability to impact their emotions. If you have ever walked into a meeting that you expected to be about a common topic and felt some tension before anyone even spoke, you have experienced the influence of other’s emotions. There have been plenty of studies to show that while showing certain facial expressions as we speak, other people’s levels of stress hormones increase . Part of emotional intelligence is understanding the nature of these emotions and how to control the situation appropriately. Some of you have an almost innate talent for understanding how this works. Others of us may have difficulty in understanding our emotions or how we influence the emotions of others. 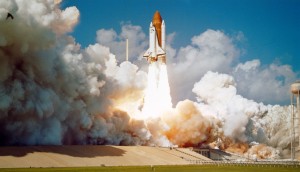 My wife told me once that I was a rock: whatever was happening I held it together. I have to admit hearing this was a source of pride—Lt. Col. Kilgore standing on the beach with the enemy raining bombs down around me, showing neither fear nor anger, calm and collected. Unfortunately, I am not a rock. Rather, what she sees is actually an inaction that does not fit the emotion.

To highlight my own level of emotional intelligence I will share a short story from class. Greg mentioned the Challenger disaster to highlight how President Ronald Reagan used emotional intelligence to respond to the tragedy through his State of the Union address . In 1986 seven astronauts, one of whom was a school teacher, were to travel to outer space. This particular launch was a huge deal because it was the first time a civilian (the teacher) would be sent to space. Shortly after the launch, the shuttle exploded killing all of the astronauts on board. Millions of children across the world were watching. What was supposed to inspire a nation ended in complete tragedy while the whole country watched. After watching the Reagan speech in class, I vaguely recalled sitting on my gray living room floor watching this on a big, square box TV.

Greg had probably continued on with his lecture for about twenty minutes when I realized I had zoned out. I had become lost in my own mind and was not cognizant of the fact that I was becoming increasingly sad about an event that occurred over twenty years ago. Imagine being hijacked like that in a meeting for work. It happens, maybe more frequently than a lot of us realize. I had lost twenty minutes of my class trying to form a reaction to an emotion I did not understand. It is not that I am a rock, but that my reaction or understanding of certain emotions is delayed. Fortunately, this is something that can be changed. Dr. Wayne Dyer gives a great perspective on changing our memes through his book Excuses Be Gone.

Top 10 Ways to Improve Your EQ

I admit, I have a tough time dealing with some emotions, both up emotions and down emotions. Anger and sadness are two emotions that I commonly confuse. I grew up in a family where crying wasn’t exactly discouraged, but it also wasn’t encouraged. When I experience sadness, this is an emotion linked to crying and as that wasn’t acceptable behavior,it often results in a response of anger.

When I was in college I was with my grandma when she passed away.  She was what may be considered the typical grandmother: loving and caring, always had pudding pops in the freezer and no matter how often we ate them, it seemed like they were always expired. I was sad, but my reaction would have indicated to many people that I was angry. I left and lifted weights for hours. I felt bruised by the amount of tension I had produced in my muscles, but I did it again later, and the next day. I don’t think I talked to anyone, including my roommates who I normally spent time with every day, or for several days afterwards. And when I did finally start talking to them, I didn’t mention my grandma at all. I wasn’t angry, but reacting angrily allowed me to close down and skip the inevitable display of emotion connected to sadness.

My present response as I write this is more appropriate to the emotion I actually felt—a little sadness with a little joy. After all, my grandma lived a good life. She was a great person to know and I was lucky to have been able to spend so much time with her. On the night of her passing, I was with most of my family. Growing up with a close family is one of my most cherished childhood memories. After fifteen years I’ve formed an appropriate response to my grandmother’s passing.

As my current example from class shows, however, I’m not a Jedi Master yet. Transformational Leadership was helpful in understanding that emotional intelligence isn’t a natural ability that everyone has, but it is an ability that I can improve upon through deliberate decisions.